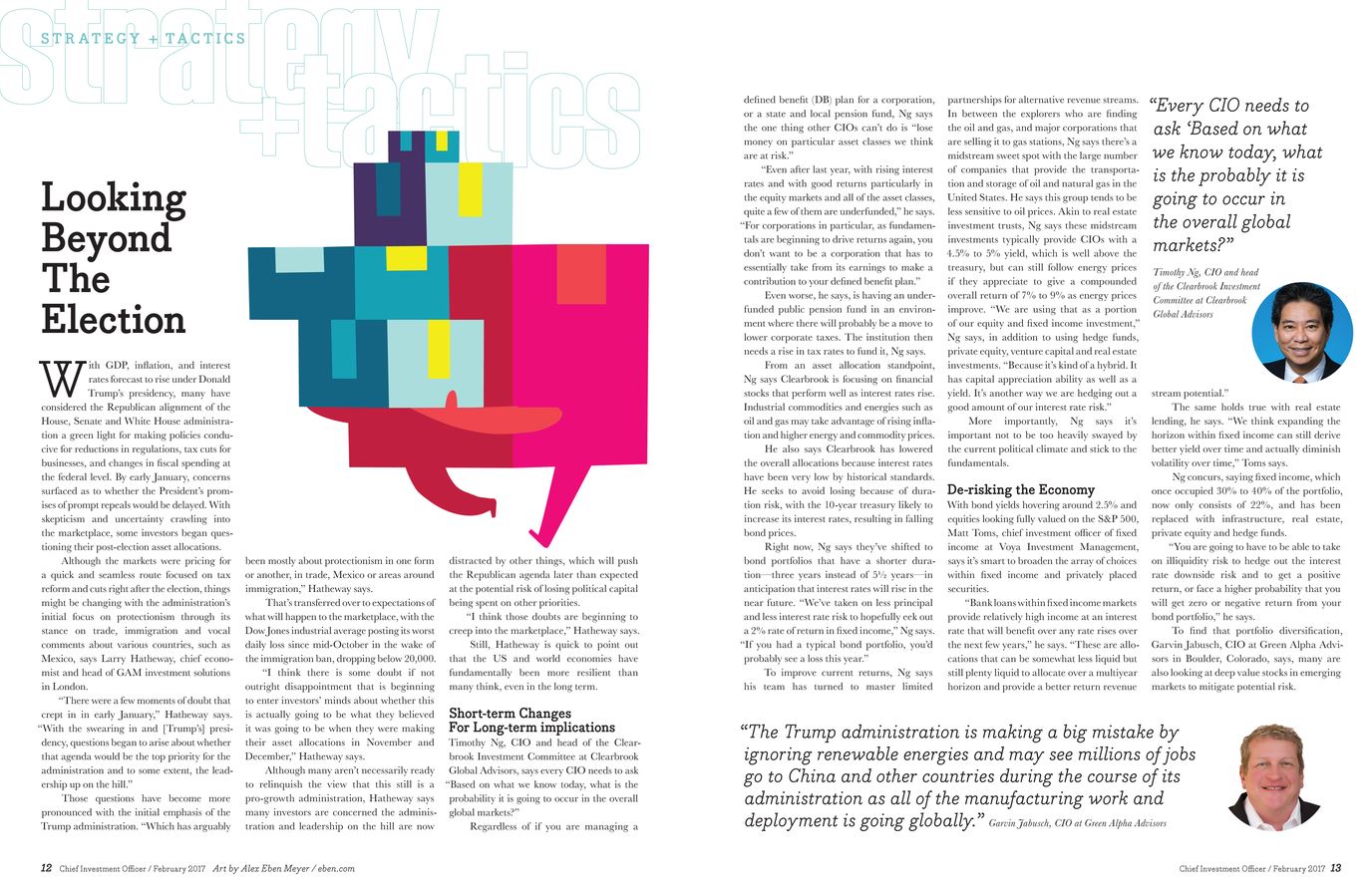 With GDP, inflation, and interest rates forecast to rise under Donald Trump’s presidency, many have considered the Republican alignment of the House, Senate and White House administration a green light for making policies conducive for reductions in regulations, tax cuts for businesses, and changes in fiscal spending at the federal level. By early January, concerns surfaced as to whether the President’s promises of prompt repeals would be delayed. With skepticism and uncertainty crawling into the marketplace, some investors began questioning their post-election asset allocations.

Although the markets were pricing for a quick and seamless route focused on tax reform and cuts right after the election, things might be changing with the administration’s initial focus on protectionism through its stance on trade, immigration and vocal comments about various countries, such as Mexico, says Larry Hatheway, chief economist and head of GAM investment solutions in London.

“There were a few moments of doubt that crept in in early January,” Hatheway says. “With the swearing in and [Trump’s] presidency, questions began to arise about whether that agenda would be the top priority for the administration and to some extent, the leadership up on the hill.”

Those questions have become more pronounced with the initial emphasis of the Trump administration. “Which has arguably been mostly about protectionism in one form or another, in trade, Mexico or areas around immigration,” Hatheway says.

That’s transferred over to expectations of what will happen to the marketplace, with the Dow Jones industrial average posting its worst daily loss since mid-October in the wake of the immigration ban, dropping below 20,000.

“I think there is some doubt if not outright disappointment that is beginning to enter investors’ minds about whether this is actually going to be what they believed it was going to be when they were making their asset allocations in November and December,” Hatheway says.

Although many aren’t necessarily ready to relinquish the view that this still is a pro-growth administration, Hatheway says many investors are concerned the administration and leadership on the hill are now distracted by other things, which will push the Republican agenda later than expected at the potential risk of losing political capital being spent on other priorities.

“I think those doubts are beginning to creep into the marketplace,” Hatheway says.

Still, Hatheway is quick to point out that the US and world economies have fundamentally been more resilient than many think, even in the long term.

Timothy Ng, CIO and head of the Clearbrook Investment Committee at Clearbrook Global Advisors, says every CIO needs to ask “Based on what we know today, what is the probability it is going to occur in the overall global markets?”

Regardless of if you are managing a defined benefit (DB) plan for a corporation, or a state and local pension fund, Ng says the one thing other CIOs can’t do is “lose money on particular asset classes we think are at risk.”

“Even after last year, with rising interest rates and with good returns particularly in the equity markets and all of the asset classes, quite a few of them are underfunded,” he says. “For corporations in particular, as fundamentals are beginning to drive returns again, you don’t want to be a corporation that has to essentially take from its earnings to make a contribution to your defined benefit plan.”

Even worse, he says, is having an underfunded public pension fund in an environment where there will probably be a move to lower corporate taxes. The institution then needs a rise in tax rates to fund it, Ng says.

From an asset allocation standpoint, Ng says Clearbrook is focusing on financial stocks that perform well as interest rates rise. Industrial commodities and energies such as oil and gas may take advantage of rising inflation and higher energy and commodity prices.

He also says Clearbrook has lowered the overall allocations because interest rates have been very low by historical standards. He seeks to avoid losing because of duration risk, with the 10-year treasury likely to increase its interest rates, resulting in falling bond prices.

Right now, Ng says they’ve shifted to bond portfolios that have a shorter duration—three years instead of 5&frac12; years—in anticipation that interest rates will rise in the near future. “We’ve taken on less principal and less interest rate risk to hopefully eek out a 2% rate of return in fixed income,” Ng says. “If you had a typical bond portfolio, you’d probably see a loss this year.”

To improve current returns, Ng says his team has turned to master limited partnerships for alternative revenue streams. In between the explorers who are finding the oil and gas, and major corporations that are selling it to gas stations, Ng says there’s a midstream sweet spot with the large number of companies that provide the transportation and storage of oil and natural gas in the United States. He says this group tends to be less sensitive to oil prices. Akin to real estate investment trusts, Ng says these midstream investments typically provide CIOs with a 4.5% to 5% yield, which is well above the treasury, but can still follow energy prices if they appreciate to give a compounded overall return of 7% to 9% as energy prices improve. “We are using that as a portion of our equity and fixed income investment,” Ng says, in addition to using hedge funds, private equity, venture capital and real estate investments. “Because it’s kind of a hybrid. It has capital appreciation ability as well as a yield. It’s another way we are hedging out a good amount of our interest rate risk.”

More importantly, Ng says it’s important not to be too heavily swayed by the current political climate and stick to the fundamentals.

“Bank loans within fixed income markets provide relatively high income at an interest rate that will benefit over any rate rises over the next few years,” he says. “These are allocations that can be somewhat less liquid but still plenty liquid to allocate over a multiyear horizon and provide a better return revenue stream potential.”

The same holds true with real estate lending, he says. “We think expanding the horizon within fixed income can still derive better yield over time and actually diminish volatility over time,” Toms says.

Ng concurs, saying fixed income, which once occupied 30% to 40% of the portfolio, now only consists of 22%, and has been replaced with infrastructure, real estate, private equity and hedge funds.

“You are going to have to be able to take on illiquidity risk to hedge out the interest rate downside risk and to get a positive return, or face a higher probability that you will get zero or negative return from your bond portfolio,” he says.

“The Trump administration is making a big mistake by ignoring renewable energies and may see millions of jobs go to China and other countries during the course of its administration as all of the manufacturing work and deployment is going globally.”

He suggests doing a deep dive into what will be next for the global economy. Ask “Where is the global economy going and how is it getting more efficient? What things are going to help us solve our biggest problems that present the most clear danger to the long-term well being of the economy?” Jabusch says.

“It’s about de-risking the economy from the things that are going to prevent long-term growth,” he says

Jabusch points to renewable energies—with hydropower and wind being the two largest contributors— being the fastest- growing energy source, which is expected to increase by 2.6% per year through 2040, according to the International Energy Outlook 2016 report released by the US Energy Information Administration.

“The Trump administration is making a big mistake by ignoring renewable energies and may see millions of jobs go to China and other countries during the course of its administration as all of the manufacturing work and deployment is going globally,” he says. “What you should look for are companies that have global distribution networks and aren’t overly reliant on the United States.”

One of the biggest questions to ask is “What is the potential growth rate of the US economy [considering] the number of workers and productivity of those workers,” Toms says.

“If immigration is going to be slower in the US and the natural growth rate is already quite low, you have to look at the productivity number, which has been very subdued,” he says.

Toms says the economy needs population growth or productivity growth so that any growth over the next one to two years becomes sustainable, he says. “If that doesn’t come, then this cycle [between recessions] will prove to be shorter, and when you look at 2019, things start to get a little bit dark.”

While others have only predicted two rate hikes, Toms says the Federal Reserve will likely make three hikes this year, and another three in 2018. The yield curve is a particularly important indicator, he says, to see if the Fed is increasing rates at a slow enough pace.

Over the past few years, there’s also been a strong focus on fees in the industry and pension plans taking a longer-term approach to diversify, and include alternatives and hedge funds as well, Toms says, and an emphasis on reducing the amount of asset allocations.

“We think in the near term that reduction is likely to continue,” Toms says. “Ultimately the bigger story is the fact that there probably are too many hedge funds that don’t justify their fees. Those that do justify their fees over a long-term horizon will continue to be very successful and well sought out by the pension world, while you are likely to see the overall amount dedicated to hedge funds decline.”

With the backup in yields and mortality table changes that forestalled some increases in funding ratios last year, Toms says many are contemplating a liability-driven investment (LDI). “Anything approaching a 3%, 10-year note yield will see an increasing willingness of plans to adopt an LDI approach,” he says.

This is predicated on pensions having strong funding ratios and enough assets in their assumed liability. “For a good number of public plans that have funding ratios of 60 to 80%, you need to get that number up to 90% to 100% before considering adopting an LDI strategy,” he says.

It’s also important to be pragmatic but able to react if the geopolitical situation warrants it. Given the current political climate, Ng recommends revisiting asset allocations at least every six months, because “the volatility is going to be higher than what we are used to over the past several years.”

Look for dislocations in the market to make a tactical move. This shouldn’t be based on a tweet but a major change, such as the Brexit announcement, that impacts the markets on a fundamental basis and makes sense on a relative value basis to make such an investment over the next few years.

“If you’ve suddenly got a 20% to 30% discount in a major asset class, then absolutely do it,” Ng says. “That’s a massive opportunity you should take advantage of.”

Regardless of what happens politically, Ng says it’s still important to stick to your fundamentals and a particular economic outlook you think will last in the long term. “In other words, if you have [New Orleans Saints quarterback] Drew Brees on your fantasy football team and he has a bad week, don’t put him on waivers because he had one bad week,” Ng says. “He’s still a good quarterback for 16 weeks.”