Water is a Big Deal, But How is an Investor to Respond?

Everyone now knows global freshwater risk is real. Will water prove a chokepoint that stymies world economies? We have to concede that it could, affecting as it does agriculture, energy, all forms of production, and, oh yeah, since it’s the primary basis for life on earth. This makes water issues intimidating, but also means that figuring them out will provide among the most dynamic and profitable areas for seeking investment opportunity for years if not decades to come.

Fortunately, the topic is finally being discussed with a gravity proportionate to its potential outcomes. The World Economic Forum (WEF), for example, recently named “water crises” as their number one 2015 global financial risk in terms of impact, and their eighth highest risk in terms of likelihood.[i]

Specifically, the WEF report warns of “a significant decline in the available quality and quantity of freshwater, resulting in harmful effects on human health and/or economic activity” and of a “deterioration in quality of air, soil and water from ambient concentrations of pollutants and other activities and processes” Not that we needed a bunch of one-percenters to tell us there’s a water crisis, but their research group does good work. To cite just three statistics from the report:

♦  Water use is growing at twice the pace of population growth. By 2025, two-thirds of the world population will be experiencing water “stress conditions.”

Further, according to the World Resources Institute, “we have exploited surface water to the point that thousands of rivers have literally vanished from the map.”[ii]

The Colorado is one of many rivers that no longer reaches its delta with the sea. Photo by Jeffrey S. Deems. Nankoweap, Grand Canyon, Arizona. 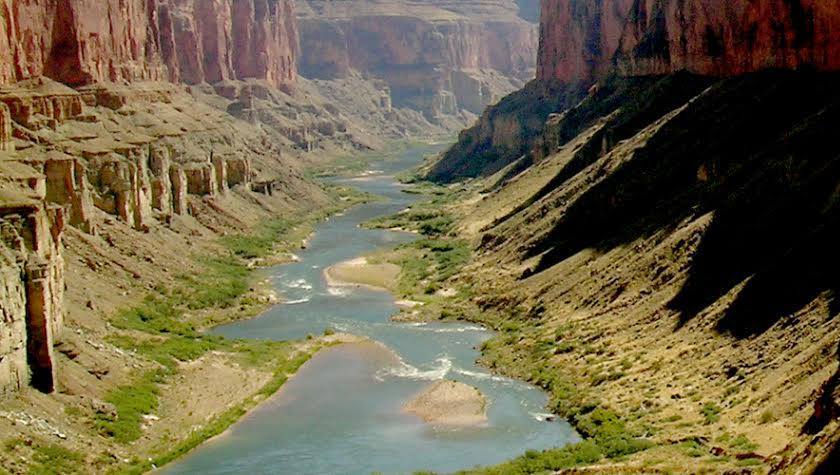 Meanwhile, down in Brazil, we can see more dramatic effects. The drought there has become so severe that population centers are at times receiving no municipal water, and the energy-water nexus has been debilitated to the point that “hydroelectric facilities that supply power to Brazil’s most densely populated city of Sao Paulo are nearing zero capacity.”[iii] Which, in turn, means a reversion back to fossil fuel use for electricity, contributing to a negative-outcomes feedback loop.

Again, according to WEF, “the effects associated with climate change will put further pressure on societies. Its expected impact on the ability to grow food and access water could prompt sudden and uncontrolled population migrations, putting additional pressure on receiving countries,” and “global water requirements are projected to be pushed beyond sustainable water supplies by 40% by 2030.”

What do scientists think? Intergovernmental Panel on Climate Change (IPCC) Chair Rajendra Pachauri recently remarked that “if you look at agricultural products, if you look at animal protein – the demand for which is growing – that’s highly water intensive. At the same time, on the supply side, there are going to be several constraints. Firstly because there are going to be profound changes in the water cycle due to climate change…Naturally, this (water crisis) is also going to lead to tensions – probably some conflict between riparian groups and riparian states.”[iv]

All this, unfortunately, is just a small sample of the water issues emerging worldwide and what folks are saying about them. To get a bigger picture, I recommend the frightening read that is the U.S. National Intelligence Council’s Global Water Security report.[v] They foresee the nexus of food, water, energy and climate change as a key mega trend that will define the world, and not for the better, unless dramatic changes happen now.

Globally, we’re at least beginning to talk the right talk about finding solutions. Well and good, but how will we translate this sense of urgency into means of mitigation, adaptation and investment opportunities? Can the three be aligned or will doing something about resource scarcity issues surrounding water be a governmental or even supra-national task? The answer is and must be ‘all of the above.’ Monitoring, treating, measuring, managing, conserving, transporting, storing and making new freshwater will all be parts of the aggregate solution, and all do and will feature innovative companies making it happen, hopefully in close cooperation with policy and science.

How big is the opportunity in the short term? “By 2030, global food demand is set to increase by 50%, energy demand by 50% and water demand by 40%. The necessary focus on water treatment, management, infrastructure and supply could lead to a water market worth over $1 trillion by 2020,” according to analysis by Merrill Lynch.[vi]

A trillion dollar market emerging in just the next five years sounds like fertile investment ground to me. So, what areas do we look at in terms of identifying opportunity? Well, there are several broad categories:

Monitor It and Measure It

Perhaps the most important single thing we can do to manage water is know what’s in it, how much of it we have, and how much we need for given uses. In other words: monitor it.

Why is this important? Because water safety, of both publicly and privately owned reserves and sources, is at risk globally right now, including in the United States. Let us remember that Halliburton managed to punch a loophole for fracking through the Safe Drinking Water Act.[vii] Not only are fracking operations exempt from the Act nationally (The San Francisco Chronicle just ran a piece revealing that California has for years knowingly let oil and gas operations inject chemical-ridden wastewater into freshwater aquifers – even during the current drought[viii]), but in some states, there are criminal penalties awaiting any insider who divulges what is in fracking chemicals.[ix] Frackers and others whose use of water renders it undrinkable have routinely outbid farmers and municipalities at water rights auctions. So, knowing what comes out of the tap or waters the farm is critical. Here, we look for opportunities in scientific equipment makers, specifically analytical systems solutions.

Next, measurement and the ability to then carefully use water in agriculture and other industries means big savings of this valuable resource.  The idea of “more crop per drop” is the motto in this world, and we like providers of drip irrigations systems and hygrometers that let farmers know, down to the parts per million, how much water is in their soil at any given time and whether that’s above or below ideal for a given crop considering variables such as location, soil type and time of year. You can’t manage what you don’t measure.

Make More of It

Usually this means desalinization (sometimes called ‘desalination,’ colloquially ‘desal’), which along with treating municipal and farm wastewater is the principal way to get freshwater that is not dependent on precipitation. So places such as deserts and islands, whose water needs exceeds their precipitation footprint, have been pioneers in this field, and where we see some interesting progress.

Progress such as integration of solar into the energy-intensive desal process. In dry Pakistan, “worsening drought has led to over 80 percent of water resources in Pakistan’s southern Tharparker district becoming unfit for people to drink…that has led to plans by the Sindh provincial government to invest 5.4 billion Pakistani rupees ($53 million) in installing 750 solar-powered reverse osmosis water purification plants across the sprawling desert district, to help get safe drinking water to the region’s over 1.5 million people.”[x] Even oil states like Saudi Arabia are now making plans to use solar-powered desal “in order to save on energy costs, as well as be in tune with new environmental polices” and to “focus more on using renewable energy and even become an exporter of this clean form of energy as it has been doing with oil.”[xi]

Islands aren’t always dry as deserts, but they have only so much surface area and thus limited ability to catch rainfall, even in the tropics. Grand Cayman based Consolidated Water Co. Ltd. (ticker: CWCO) has been making potable water out of seawater since 1973. This long experience and proving of concept may serve them well as more places clamor for water solutions. Currently, CWCO is expanding away from the Caribbean basin and is building a 100 million gallon per day desal plant in Rosarito, Mexico, which will slake thirst in Northern Baja, Mexico and San Diego County. San Diego may ultimately receive 20,000 acre-feet per year from the project, about “two-thirds of the district’s water supply.”[xii] In addition to deep domain expertise, we’re also encouraged by CWCO’s commitment to making their operations as sustainable as possible. CWCO runs desal plants that are among the world’s most energy efficient and is increasingly embracing renewables, primarily solar, as means of powering water production.[xiii]

Transport It (Infrastructure) and Treat It

Moving water provides opportunities in advanced materials, energy capture and recapture (like the interesting work going on in Portland[xiv]), loss prevention, wastewater treatment and more. The most innovative example of water treatment has got to be the Gates Foundation-funded technology to make pure drinking water from human sewage. A bit early for investing, but definitely a big potential solution for urban areas. There’s even video of Bill Gates enjoying a glass of the stuff.[xv]

In my view, the two most promising approaches to making more efficient use of freshwater in agriculture (apart from crop per drop comments above) are indoor farming, and both indoor and outdoor raising of halophytes (saltwater loving plants).  For the latter, I refer you to the work of Dennis Bushnell, chief scientist at NASA’s Langley Research Center, who has been advocating adoption of halophyte farming for a decade now.[xvi] His work is early-stage, but to get an idea of the capabilities of halophytes to address at scale some of our key water concerns, I refer you to his 2008 paper where he breaks it all down.[xvii]

Indoor farming is a clear path forward. Consider: indoor farms can be very close to population centers, they’re naturally organic as pests aren’t a threat indoors, and most importantly, they are hugely more water efficient than outdoor farming. Presently, the world’s largest indoor farm is in an old Sony plant in Japan. It is “100 times more productive than outdoor fields In Japan, the world’s largest indoor farm produces 10,000 heads of lettuce each day with 99 percent less water than outdoor fields. All hail the farm of the future.”[xviii] Opportunities exists in many areas here: full- and targeted-spectrum LEDs, hydroponic equipment providers, specialized REITs and many more.

We Gotta Have Water

Opportunities abound to make tactical and strategic investments all along the various value chains that affect water. So even when the news is all about oil or employment or interest rates, it pays to keep an eye on what matters most to the underlying economy of people and their means of enduring. As the Guardian has pointed out, “analysts, traders and commentators have watched their fortunes ebb and flow, speculating on what happens next. But during all the action, you might have missed an even bigger story: water, not oil, could be the real commodity to watch in 2015.”[xix] All macro indicators, from a global population going to nine billion to more meat consumption to urbanization to climate change to fracking, all impact the availability and quality of water. There are few long-arc trends that truly define our underlying realities the way water does. Creative application of careful financial analyses should result in good outcomes for the long-term investor.

Disclosure: Green Alpha ® Advisors was long CWCO at the time of writing this article.

[xiii] Not attributed, “CWCO touts Windsor and Blue Hills water plants as two of the most energy efficient in the world,” Bahama Islands Info, October 10, 2014. http://www.bahamaislandsinfo.com/index.php?option=com_content&view=article&id=19286:cwco-touts-windsor-and-blue-hills-water-plants-as-two-of-the-most-energy-efficient-in-the-world&catid=61:nassau-and-paradise-island-news&Itemid=164