Indoor Farming will Feed the Next Economy ~ Worth

Originally published by Worth
By Garvin Jabusch

At Green Alpha, we talk a lot about tackling systemic risks with economic solutions, but it can be hard to envision what these risks and solutions look like beyond the clearest and most discussed sector—energy. How can private enterprises find answers to systemic risks associated with something like agriculture while still contributing meaningfully to the global economy? Time to break it down: As with any large-scale technological change, it’s helpful to start with the big picture, figure out what we know and go from there.

On the highest level, there are several primary systemic risks to the global economy—climate change, resource scarcity and widening inequality—along with their intersecting downstream impacts. These risks have the power to damage the economy’s ecological and social underpinnings, thereby undermining continued economic growth. To arrive at a de-risked economy that allows us to thrive indefinitely without succumbing to these threats, it will be necessary to both address systemic risks directly and increase economic output efficiencies to ensure a good standard of living for all.

This brings us to indoor and vertical farming, solutions that will be key constituents of a de-risked economy. These innovative agricultural systems tackle a number of different risk factors, including water scarcity, negative health and ecological impacts associated with herbicides and pesticides, yields for growing populations and inequality. How? Let’s look at a few factors.

Let’s start with water risks and how indoor farming fits into the solution puzzle. The Economist recently wrote that water is the new oil, and “when the word water appears in print these days, crisis is rarely far behind… a resource long squandered, now growing expensive and soon to be overwhelmed by insatiable demand. Aquifers are falling, glaciers vanishing, reservoirs drying up and rivers no longer flowing to the sea. Climate change threatens to make the problems worse.” Given that farming dominates water use—amounting to 70 percent of global water withdrawals—we are in dire need of efficient solutions to our growing water problem.

How will indoor farming contribute? Because the farms are indoors, there’s no evaporation from dry air or sunlight. In fact, one of the world’s largest indoor farms claims “99 percent less water usage than outdoor fields.” A facility run by AeroFarms in Irvine, Calif., even “generates its own filtered water for its produce from humidity in the air,” as reported by the Wall Street Journal. Water scarcity risk, a key threat to the global economy, can thus be mitigated.

Synthetic chemical herbicides and pesticides, too, pose a threat. Indoor farming is isolated from the outside world, meaning there is no need for these toxic compounds. Herbicides and pesticides are linked to a host of negative effects, including developmental problems in children, Parkinson’s disease, cancer and oceanic dead zones. Such unintended consequences of chemical farm-aids are critical systemic risks that will cumulatively affect human and global health, undermine our ability to feed ourselves and to maintain biodiversity, and so ultimately they contribute to environmental and economic failure. Controlled conditions of indoor farming present one opportunity to sever ourselves from synthetic chemical pesticides and herbicides.

The ability of indoor farms to closely control conditions under which their plants grow also provides a constant optimal environment tailored to every crop. These conditions allow for much higher yield and shortened harvest intervals. Essentially they “can provide perpetual harvests every day of the year.” Amazingly, at AeroFarms’ Newark, N.J., facility, “a crop can go from seed to shoot to harvest in eighteen days,” according to the New Yorker. This potential increase in yield, paired with zero synthetic pesticides and herbicides, means indoor farms might also be able to feed the rapidly growing demand for natural and organic produce among consumers.

Meanwhile, traditional outdoor farmers and their yields are subject to the vagaries of weather and climate. As the globe warms, “climate change will lessen the rate of any yield improvements that will be achieved by technological advances,” according to new research out of UC Davis and Cornell University, and “climate change will likely cause wheat and barley yields to decline by 17 to 33 percent by the end of the century.”

This isn’t just a potential problem for the future. Smaller scale effects are already occurring. For example, 90 percent of America’s lettuces from November through March of each year come from a relatively small area near Yuma, Ariz. Due to bad weather around Yuma this season, leafy greens are temporarily in short supply.  But when our lettuce comes from a high-rise across town?  Potential food scarcity can be mitigated. 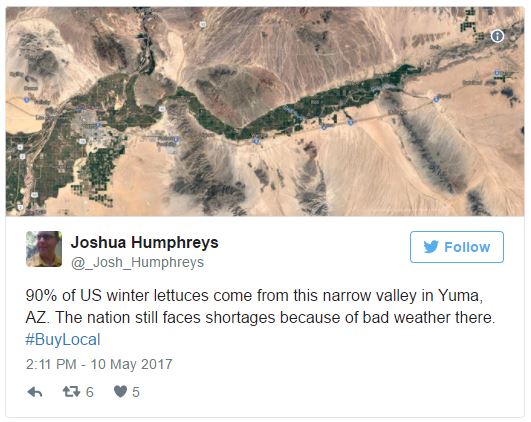 President of the Croatan Institute, Josh Humphries said a lot about agriculture with one image and just a few characters

Cumulatively, the risks associated with conventional agriculture also exacerbate inequity in the global economy. The United Nations Development Programme reported that climate change is projected to undermine food security over the long term if left unaddressed, a phenomenon that will underscore “the link between poverty and vulnerability to natural hazards.” Moreover, the UNEP states that this exposes the inequity of unsustainable development, in that “countries and populations likely to be most harmed by climate change impacts are often the least responsible for causing them, and have limited capacity and resources to cope with the consequences.”

Here, again, indoor farming steps in. Not only do the farms reduce the environmental impact of agriculture, but they also offer one possible opportunity to expand access to food—something that 46.5 million Americans struggle with. Food deserts—low-income communities that are far away from healthy food—may stand to benefit from agriculture closer to urban centers. Lack of and price of transportation pose major impediments to nutritious food access, but what if produce came closer to low-income households, rather than the other way around?

The already cited New Yorker article added another key benefit to the list of advantages, pointing out that “vertical farming can allow former cropland to go back to nature and reverse the plundering of the earth.” Meaning, as naturalist E.O. Wilson has so persuasively argued we should, we might recover the ability to set aside a reasonable amount of Earth for biodiversity preservation. Also, indoor farms can be close to or within urban centers, meaning there’s less need for long-haul transport and associated emissions, again, reducing system-wide risk.

Of course, indoor farming has yet to become a perfect economic solution due to issues of cost and scale. But it may have the capacity to become one. The advantages of indoor farming will become magnified as technology and know-how improve with time and experience. “New technology will improve the economic viability of vertical farms…New cameras, sensors and smartphone apps help monitor plant growth. One company is even developing augmented-reality glasses that can show workers which plants to pick,” commented an expert in the Wall Street Journal. Thus, indoor farming meets both criteria for existing in a de-risked economy: It greatly mitigates systemic risks and economically exceeds its technological predecessor, generating wealth and other kinds of value (such as being organic by default) not previously available.

A global shift to indoor farming will help stabilize the climate, improve food security and safety and alleviate water stress. Where traditional agriculture uses the majority of most nations’ fresh water, requires the production and use of synthetic pesticides and herbicides, destroys forests, depletes and degrades soil and even oceans and requires long-distance food transport, indoor farming does not. “As cities continue to expand, we must continue to challenge the dichotomy between what is urban and what is rural,” says a principal involved in developing a 250-acre urban agricultural district in Shanghai.

Over the long term, there’s no question: Indoor and vertical farming is what’s next. How, then, can we go about investing in this revolution? That’s a topic for another post.