The Pope and the Climates of Justice

Pope Francis’s encyclical on global warming and environmental degradation, Laudato Si, identifies our disruptive effects on our climate as social justice and spiritual issues. “Those who possess more resources and economic or political power seem mostly to be concerned with masking the problems or concealing their symptoms,” he writes, lamenting that those with privilege lack a “sense of responsibility for our fellow men and women upon which all civil society is founded.”

The image above is from the Center for Global Development and it’s one in a series that ranks the negative impact of climate change by country. The darker red colors are where currently measurable consequences are the worst. Notice that the richest countries in the world, with the exception of China and India, the largest polluters, are all relatively safe. To quote the New York Times:

“Catholic theologians say the overarching theme of the encyclical is ‘integral ecology,’ which links care for the environment with a notion already well developed in Catholic teaching — that economic development, to be morally good and just, must take into account the need of human beings for things such as freedom, education and meaningful work.”

Anyone who does not refuse consensus science understands that climate change is real, and reliably and statistically caused in whole or in part by the emission of greenhouse gases, most notably carbon dioxide and anthropogenic methane. On the other hand, you have climate deniers who can be grouped into two camps: the truly ignorant, and the feigned ignorant. The feigned ignorant tend to be the people, governments, and organizations which stand to lose the most both personally and professionally from admitting the true causes and ramifications of climate change. This group isn’t probably worth any time or effort, as they will simply be swept away as the world changes, if they continue to refuse to change with it.

It is the truly ignorant that we must come to terms with if we hope to have a chance. In the United States, public education has been faltering and deteriorating since the 1970s. Wages have stagnated, and the number of truly poor people has exploded. It’s not hard to find young (or middle-aged) people who are the product of safe and fulfilling middle class upbringings who understand climate change, the fossil fuel economy, and support changes to the global economy that would avert and reverse climate change. The problem is, those demographic groups are an extremely small minority of the entire planet.  They are mostly white, mostly western, and even in their own countries not always the majority. Why?

Because: inequality. Inequality is the new cause celebre in the West, as the existing middle class that re-built Europe after WW2, and turned the United States into the world’s greatest superpower begins to notice itself wasting away, and mobilizes to save itself. A new gilded age has quietly and subtly transformed Europe and the United States, and engorged itself on the former prosperity of the middle class.

The point is that climate change is no longer an intellectual issue. The science is clear, and it is decisive. Secondarily to climate change itself, pollution kills or harms millions of people a year. Even if in the longer term rising global temperatures posed no risk, we’re poisoning our air, water and food at ever accelerating rates. Eventually, given business as usual, even the rich people will have to eat GMOs, Round-Up, and breathe asphyxiating particulate matter in their air. The causes of climate change and ecological destruction on a global scale are all largely the result of a small cabal of industries that support and in return are vigorously supported by central and peripheral governments.

So if climate change is not an intellectual issue, what is it? If we borrow from the social sciences, like public health and sociology, we can see that it’s really all about inequality. Poor people live shorter lives, are beset by more illnesses, and generally enjoy their time on Earth (objectively, as measured by researchers) less than the non-poor. Many studies have investigated the ramifications of poverty on the mind and decision making, as well as the ability of the brain to grow and develop normally under such conditions. It turns out, it can’t. One study pinned the cost of poverty at around 13 IQ points over time. The stress, anxiety, and increased health related setbacks that the poor face simply take over any dreams or aspirations most poor people have of leading healthy, educated, informed lives. When you’re running to school dodging bullets, it does not leave a lot of time to think about whether or not cars should be electric or internal combustion and fossil fueled.

People who are poor, poorly educated, and stressed out just trying to live one day to the next are both more at risk from climate change (in the especially at risk countries in the map above), and also unfairly left out of the global consensus on how we should treat the environment and how we should power our economies. Whether it’s a lack of access to high quality education to make informed decisions, or simply a lack of material resources to make environmentally aware life and lifestyle choices, the poor are systematically tied to the carbon economy, with no intellectual or material resources with which to combat it, or change their station. Additionally, all of the worst impacts of climate change like food insecurity, increased infectious disease (unclean water), increased chronic disease (asthma, cancers, etc.), disproportionately affect those who lack the resources to insulate themselves from them.

The science is clear on climate change, but only those privileged enough to have access wealth, education, and therefore decision making power over their own lives are in a position to care, much less do anything about it. See the chart below for a global accounting of environmental concern plotted against average per capita GDP (Franzen and Meyer, 2009). 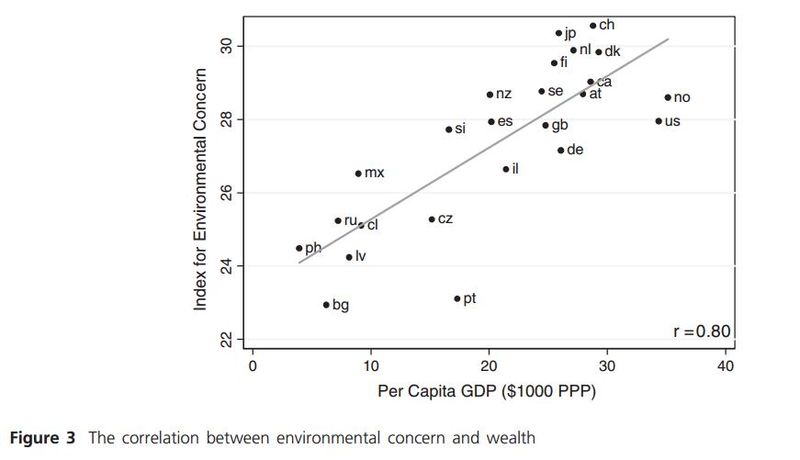 As investment managers, we at Green Alpha write and talk a lot about the economic benefits of investing in the solutions to our greatest systemic risks. Pope Francis’s humanist take on the crisis has given us a chance to reflect anew on why the transition to indefinite sustainability matters for everyone, not just those who can own mutual funds.