Commonly-used performance benchmarks, such as the S&P 500 Index and the MSCI World Index, exert tremendous influence over stock selection for fund managers, but for socially-conscious investors with long-term active strategies, the pressure to beat an existing index can feel constricting.

“For fear of being labelled as having terrible risk-adjusted returns, most investment managers work really hard to correlate to their benchmark,” said Garvin Jabusch, chief investment officer at Green Alpha Advisors, a $50 million responsible investing asset manager in Boulder, Colorado. “If you’re an ESG manager, it’s a trap. You’ve got to kind of decide if you want to put sustainability first or your benchmark first.”

To some extent, correlating returns with a market benchmark is a concern that any active or long-term fund manager faces, said Jon Hale, head of sustainability research at Morningstar Inc. “An investment in ESG is still an investment,” Hale said. 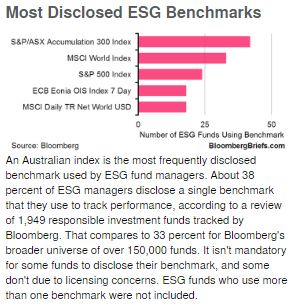 But for investors pursuing a sustainable investment strategy, some say the pressure to match a benchmark can pressure them to hold some companies they would rather not.

For example, even though German insurer Allianz SEwould like to avoid investing in some companies where it has responsible investing concerns, such as food manufacturers that use palm oil, it would be difficult to remain correlated with major market indexes by actually doing so, spokesman Nick Tewes said in an interview. “We are not able to get out of these investments, because they are part of large indices,” he said. “You can lower the percentage, but you can’t exclude them fully.”

Allianz has been lobbying index providers and other investors for the past three years to seek more inclusion of ESG factors in major benchmarks in an effort to change that, Tewes said.

Index provider MSCI Inc. has discussed incorporating environmental, social, or governance factors into its broader indexes at client feedback forums over the last six years, but has not yet proposed any changes, Remy Briand, global head of research at MSCI, said in an interview. Broad market indexes like the ones MSCI produces are designed to capture an “opportunity set” of companies based on the liquidity and availability of their shares, Briand said. But in the past few years as governments, particularly in Europe, have imposed some responsible investment criteria, there’s been some extra “tension” around whether those companies should be included, he said.

Instead of benchmarking to an established index, sustainable funds could use an ESG benchmark instead, but since most of those are already based on the regular indexes, it creates sort of a chicken-and-egg problem, said Green Alpha’s Jabusch. For now, he has focused on building his own model of the “new economy” to avoid over-investing in companies selected by major benchmarks. To him, companies in the major benchmarks represent “the best survivors of the legacy economy” rather than the future he is trying to invest in, he said.